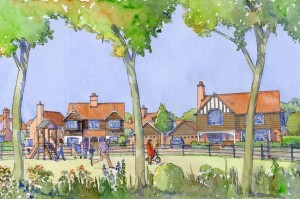 Berkeley Homes’ artists impression of its upmarket houses, proposed for Cranleigh, but could they get insurance against flood risk?

There are serious questions over whether a major housing development on the land being proposed by Berkeley Homes for its 400+ housing development at Cranleigh on the Greenfield land south of the High Street would be in compliance with the policy  restricting development in flood prone areas contained  in the National Planning Policy Framework (NPPF).

The proposal to build on this site has been around for quite a while.  The last time an assessment of available land was carried out by Waverley Council in 2009 the Berkeley site was described as potentially suitable for development, subject to resolution of issues which included highways and flooding.  At that time only the southern sections of the site are were in Flood Zone 3 – the zone of highest flood risk.

Since then the Environment Agency Flood Map for Planning has been updated.  I have compared the map showing the location of Flood Zones 2 and 3 which Waverley used in 2009 against the current map for developers on the Environment Agency website.  It seems that since 2009 the areas of the site prone to flood have been extended and an additional swathe of land across the middle of the site is now within Flood Zone 3 and more of the southern section of the site is within Flood Zone 2.

Policy in relation to development in Flood Zones 2 and 3 has also changed and been refined .  Paragraph 101 of the National Planning Policy Framework states that “Development should not be allocated or permitted if there are reasonably available sites appropriate for the proposed development in areas with a lower probability of flooding. The Strategic Flood Risk Assessment will provide the basis for applying this test. A sequential approach should be used in areas known to be at risk from any form of flooding.”

Relevant guidance for developers seeking planning permission in Flood Zones 2 and 3 was published by the Environment Agency in April 2012 (FRA Guidance Note).  This also refers to the requirement to follow the NPPF and to steer development away from Zones  2 and 3.  Examination of the Environment Agency’s Flood Map for Planning shows that other potential sites in the Cranleigh area are outside Flood Zones 2 and 3 but in fact the “Sequential Test” (which is explained in yet another document EA Sequential Test Process v3.1 April 2012) makes clear that this search for alternative sites can extend over an entire local planning authority area.

As we don’t have an up to date Core Strategy in Waverley I don’t think we have an up to date Strategic Flood Risk Assessment either (if anybody disagrees with this please say and explain why).   I certainly don’t think that there has so far been any Sequential Test on the Berkeley site so I’m expecting Berkeley Homes to have to produce their own – and that will obviously require very close scrutiny.  Even if a Sequential Test is done on the site and it is decided by the Environment Agency/Waverley that the Berkeley Homes site  meets the Sequential Test (unlikely as this currently seems) then because the site is in Zones 2 and 3 there is a further ‘Exception Test’ which the site also has to meet (see the NPPF Technical Guidance for that one). The Flood Risk Standing Advice tool for Local Authorities   says that for the Exception Test to be passed:
· it must be demonstrated that the development provides wider sustainability benefits to the community that outweigh flood risk, informed by a SFRA  where one has been prepared, and
· a site-specific FRA must demonstrate that the development will be safe for its lifetime taking account of the vulnerability of its users, without increasing flood risk elsewhere, and, where possible, will reduce flood risk overall.”

So all in all national planning policy is clearly weighted against the Berkeley Homes proposal.

Then there is the serious issue of the problems development on this site would pose for future homeowner seeking to obtain flood risk insurance.  Building housing in flood zones has very serious implications for availability of home insurance.  This is because “to avoid incentivising unwise building in flood risk areas” homes built after 2009 won’t be covered by the new agreement between the Government and the Insurance industry which is called ‘Flood Re’ and comes into effect in 2015.   So homes built in or near Flood Zone 3 may be uninsurable in the future.  That is a serious matter for anybody with a mortgage as a condition of having a mortgage is that there should be current home insurance.

Waverley has a duty of care to its current and future residents  and must consider the long term implications of permitting a major development on Flood Zone 2 and 3 when other sites are available.  The folly of ignoring this policy is graphically illustrated by events over the Christmas holiday period when I gather that newly built houses situated in Flood Zone 3 on the corner of Charterhouse Road and Borough Road in Godalming were flooded before they had even been occupied (and having seen the state Borough Road on Christmas Eve for myself I can well believe it).  However the Environment Agency also has a crucial role to play in this because the EA is a statutory consultee and it is  the EA’s opinion on  suitability of the Berkeley’s site and whether the site complies with planning policy which will probably in the end determine whether or not any application from Berkeley Homes is failed on flood risk grounds.