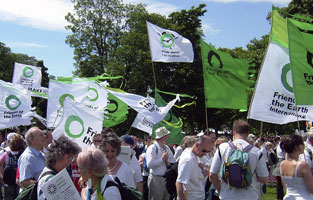 Friends of the Earth gets people campaigning at all levels – locally, nationally and internationally.  Our campaigns over the last 40 years in the UK have been groundbreaking and have been behind laws to protect wildlife in Britain, doorstep recycling for every home and the world’s first climate change act.

We believe in environmental justice – that the environment is for everyone and that healthy people and a healthy environment go hand in hand.

Waverley Friends of the Earth is one of a network of over 200 local groups of Friends of the Earth in England and Wales. Until 2016 this group also covered Woking and Guildford but after the untimely death of our very popular co-ordinator, Hilary Griffiths, who lived in Guildford, we found that we could not cover such a large area. Our campaigning area now covers the towns and villages in the south western corner of Surrey  including Farnham, Godalming, Haslemere, Cranleigh and the villages in between.

Over many years members of the local group have campaigned

In 2012 the group’s achievements particularly in promoting local renewable energy through  the Wey Valley Solar Schools Energy Co-operative were recognised by other Friends of the Earth local group members.  We were thrilled to be  voted “Group of the Year” at the 2012 Annual Friends of the Earth Conference – here are members of the group  on the stage receiving our certificate from Clive Anderson . 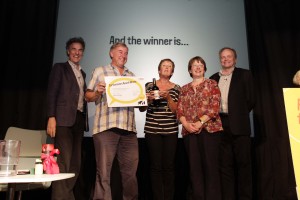