There is renewed interest and discussion in the 2008 planning application so here is the award winning Eco-settlement masterplan.  The same week in 2009 that the appeal was turned down by John Denham, the Secretary of State for Communities and Local Government, this design won Pollard Thomas Edwards Architects the Francis Tibbalds Prize at the 2009 Urban Design Awards. 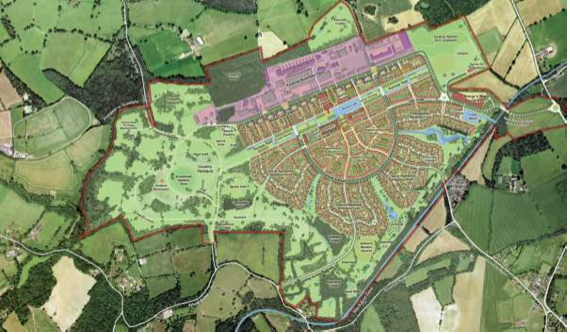 It has recently been claimed by Waverley Councillor Bryn Morgan that allocating Dunsfold Park for housing would not spare greenfields in other parts of the borough and particularly around Farnham and Cranleigh.   It now seems Councillor Morgan’s assertion may have been made on the basis that Dunsfold Aerodrome could only absorb 1500 residential units.  The masterplan shows that even with thousands of square metres of employment, services and on-site  infrastructure, not to mention 2,601 units of housing, the site could still provide room for landscaped parkland and sport facilities.  In fact the site could  absorb many more residential units – although the higher the density and the more houses the less attractive this would be as a place to live.  With a large development the developer could be expected to make a significant financial contribution towards restoration of the rail link between Guildford and Cranleigh using the Downslink which is still a protected transport corridor.   This would obviously help relieve the traffic nightmares in Guildford, at least from the south.

By  contrast, in the current economic climate 1500 residential units including 40% affordable would produce the worst of all worlds – a heavily dependent out of town housing estate with some onsite services including a primary school and some shops and services. There would be a bus service of some sort to Cranleigh which would have to be subsidised by the developer, but probably only for the first 3 years and then it would be at serious risk of being cut when the subsidy ends if it wasn’t financially viable by then.

Local residents who are concerned about the impact of proposed housing numbers on Waverley might like to ponder the low level of infrastructure provision that comes with piecemeal developments of a few hundred houses tacked on here and there which is Waverley Borough Council’s current policy in the draft core strategy which they describe as “sustainable”.  So in the case of the recent Upper Tuesley outline planning permission there are just 104 houses and nothing else – no shops, schools, pubs or employment.  The developer had to pay for various highways improvements in the area, which for those who know the difficulty accessing this site will come as no surprise but which won’t cure the access problem.  It also had to make financial contributions to Waverley for  various off site sports and recreation facilities which  will be spent locally, and other contributions to Surrey County Council for libraries and education which will no doubt disappear into the black hole at SCC into which all these contributions seem to disappear and never obviously get spent – we understand that SCC is currently sitting on millions and millions of pounds of unspent contributions.

Size of development brings certain advantages.  Below we set out the full list of items Dunsfold Park sought planning permission for in 2008 on the site itself.  There would have been additional off site infrastructure contributions including a sum in the region of £10M to secondary education provision.  In 2008 Dunsfold Park was seeking application for a mixed use settlement comprising the following………….

2,601 residential units (including 30% affordable which was the accepted percentage for affordable housing at the time) to be built to code level 4 of the code for sustainable homes and to code level 6 for energy and water
1,035 square metres of shops
230 square metres of restaurants and cafes
a public house
a hot food take-away
business uses including offices, and research and development industry (Use Class B1a and B1b) up to a maximum of 9,440sqm
light and general industry (Use Class B1c and B2) up to a maximum of 6,099 square metres
storage and distribution (Use Class B8) up to a maximum of 7,624 square metres
hotel (Use Class C1) up to a maximum of 7,015 square metres
non-residential institutions including health centre, two schools, place of worship, museum and community centre up to a maximum of 9,906 square metres
assembly and leisure uses including sports centre up to a maximum of 2,185 square metres
open space including water bodies, outdoor sports, recreational facilities and nature conservation areas
public transport routes, footpaths and cycleways
landscaping
all related infrastructure including roads, car and cycle parking, combined heat and power plant and associated equipment, water supply, telecommunications, drainage systems, waste treatment facilities and helicopter landing pad and hangar
the retention of 36,692sqm of existing buildings and their future permanent use for a specified purpose
the demolition of 8,029sqm of existing buildings
the removal of three runways and the removal of hard-standings
the retention of aviation use, but solely for the purposes of helicopter flights (such as air ambulance services, police services, etc)
the temporary use of Building 132 for a construction headquarters at Dunsfold Park, Cranleigh, GU6 8TB
………………… in accordance with application number WA/2008/0788, dated 4 April 2008

Economic circumstances have changed an enormous amount since 2008 and the percentage of affordable housing a developer is expected to supply has also increased so in reality we can’t expect the same level of infrastructure provision to be offered by a developer today as Dunsfold Park offered in 2008, but there is little doubt it would save many of the greenfields and potentially the Green Belt in Waverley if the Council looked again at the policy for Dunsfold and switched it from 100% employment including aviation to a mixed use settlement along the lines proposed in 2008/9.  It would also put beyond doubt what might happen to Dunsfold Aerodrome if it isn’t used for a mixed use settlement which would almost certainly involve investing in the aviation side to make better use of its 1880 metre main runway, the eastern end of which is only about 2 miles from the southern area of Cranleigh.

« Community Action against Non-N...
Cranleigh – The Berkeley Hom... »
Comments Off on Dunsfold Park – review of the 2008 Planning Application